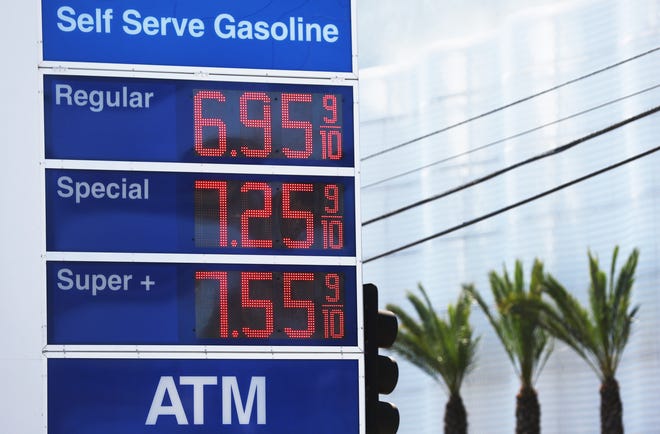 $3.51, was the average price for gas in 2018. Currently, in California, the price is $5.75. California has the highest gas prices in the entire country. This is because of our high gas taxes and coats of regulatory programs aimed at reducing greenhouse gas emissions. California’s prices cost at least $1.30 more than other states. The good news is that prices seem to be coming down; but the bad news is, it is not in California.

Severin Borenstien, an economist who studies fuel prices at Berkley thinks that these high prices may be linked to a disruption in the state’s gasoline supply chain. According to The New York Times, “Typically, the bulk price of fuel coming into California’s ports is about 10 cents higher per gallon than in other states. But for at least a few weeks, it has been 80 to 90 cents more expensive.” Borenstien further explains, “Even as the crude oil price is dropping, it appears that some problem has occurred in the refinery sector to make California-blend gasoline…I don’t know what the problem is or how quickly it will be fixed, but that’s definitely why our prices are more out of line than usual with the rest of the country.”

Russia’s Invasion of Ukraine also adds to this matter. Russia is one of the biggest oil and gas suppliers in the world. Any disturbance in this would cause major effects like the ones we are seeing. President Joe Biden banned all-natural gas, oil, and coal from Russia. Joe Brusuelas, the chief economist at accounting and consulting firm RSM, says that this is the main cause of inflation in the United States.

Another reason that contributes to the gas price increase is Covid. When the pandemic started, the country was on lockdown and people weren’t going out as often. Therefore, they didn’t need gas as much. Since there wasn’t much demand for oil, the production was slowed down. But now, Covid cases have reduced and the world is slowly making recovery.  This made the demand for gas go back up faster than they could supply it. This is why we see a rise in gas prices in the last 2 years.

P.E. teacher, Mrs. Carrizales shares her struggle with the prices. She says she noticed the prices increasing ever since the war between Ukraine and Russia started and she is frustrated by them. When asked if she spends a lot of money she said, “Yes, I spend a lot of money on gas every month. I have to fill up at least twice a week and it’s costing at least $85 each time.” “Unfortunately, coming from Oxnard/Ventura doesn’t leave many options for carpooling or other forms of transportation. The only thing I can do is to be sure to get to Costco each time to fill up, as the prices are lower than anywhere else. Not really any way around the drive and paying for gas for me. California is killing me with the gas taxes, we are higher than anywhere else!”

If prices keep rising throughout the years, most of the people’s money will be put into fuel than other necessities. They might reduce their use of cars or start taking public transportation.